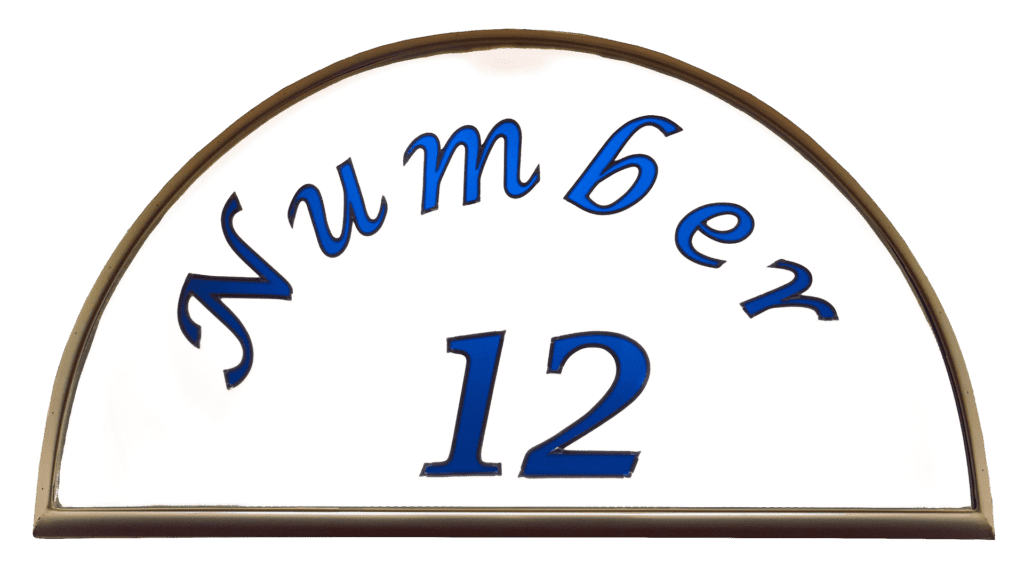 The Amazing and Mysterious Dragon Myth at Filey Brigg – 1 mile north of Filey. 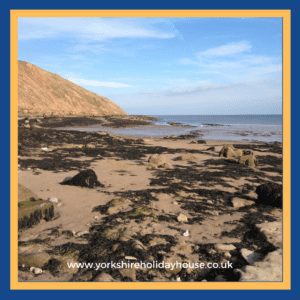 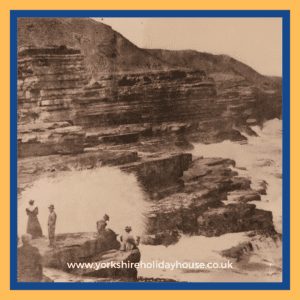 Filey Brigg is a long rocky narrow peninsula located on the East Coast of North Yorkshire. The steep cliffs are 20 metres high consist of a variety of material, from pure sandstone to pure limestone.

The history biology and geology of Filey Brigg place it among Sites of Special Scientific Interest in North Yorkshire because of its geological importance and is designated as a local Nature Reserve.

There has been many stories, legends and myths that revolved around Filey Brigg. One of these myths describes Filey Brigg as the hangout for dragons and monsters.

An old tale that goes back to the Middle Ages, is that a very fierce dragon used to reside at Filey Brigg. But despite it being huge and aggressive, it had its weakness, and that was sticky cake. No matter how much people bring sticky cake to the dragon, it would never have enough. As an attempt from the villagers to try get the dragon go away, they used to bring sticky cake, but it never stopped it from coming back for more.

There have been a few versions to the story that tells us how the dragon was defeated. One of them is from the local historian Kath Wilkie, that one day the dragon jaws got stuck together from all the sticky cake it was given by the villagers as an attempt to make it go away and that’s when they had the chance to kill it.

Another tale says that it died because it fell into the sea as a result from overeating sticky cake as the wife of a local man named Ralph Parkin fed the dragon lots of cake. Fell into the sea and drowned. This explains why the Brigg is in the shape of a Dragons back and the sticky Yorkshire cake called Parkin is named after her.

Another tale tells us that a tailor named Billy Biter killed the dragon and that its skeleton formed part of Filey Brigg!

All these stories are mysterious old myths, however Ralph Parkin and his wife Mary were real people as many fishermen and locals claim to have seen those dragons. It’s fascinating to read about these myths and legend stories. 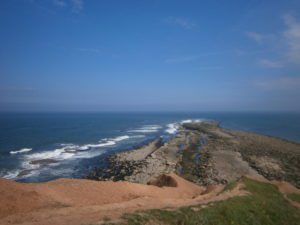 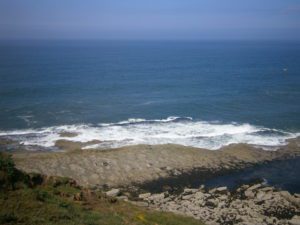 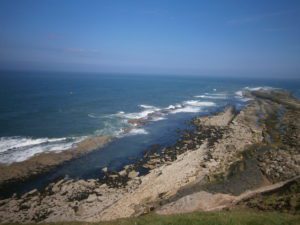 Many decades ago, there has been reports and newspaper articles that took the readers imagination far enough about the excitement in Filey. It was reported either that the Loch Monster had found its way to the Yorkshire coast or that Filey had developed a monster of its own. People would report that they had seen a huge body with numerous humps and a small head a short way out to sea. A search covering Filey Brigg and North Bay proved that it was ineffective. Then it was clarified that the creature was nothing more than dolphins moving in a line.

Another newspaper had reported that a Filey fisherman had seen a monster of a tremendous species about three miles out to sea growling with a strange voice. Imaginary stories went on.

In memory of the Filey Dragon myth which supposedly inhabited the Brigg, a ‘Dragon Ring Outside Classroom’ at country park was created in the shape of a dragon’s mouth with concrete teeth. School children often visit the Dragon Ring, listen to dragon stories and sing songs. Kids of certain age can go far with their imagination. 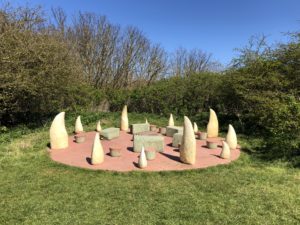 The Plesiosaur sculpture in Glen Gardens is another sculpture to commemorate the dragon myth. 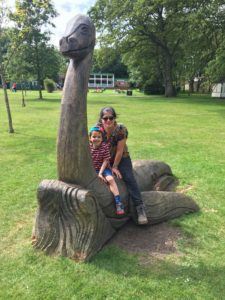 There’s plenty of places to explore in and around Filey. So why not bring your kids along to find out what Filey has to offer. You and your family can spend days exploring Filey beach and the vast array of rock pools, walk to the end of the brigg at low tide and enjoy the rocks and cliffs.

Filey beach is one of the safest beaches in the UK. The beach slopes gently and there are no deeper parts to catch you out of your depth. It also has a life guard in the summer. One of the most popular things to do in Filey for children is to spend hours messing on the beach and in the sea.

Check out our website if you’re considering your holiday at Number 12 Yorkshire Holiday House .

Don’t hesitate to get in touch and let us know if you have any questions, here to help you make the most of your holiday

The Lighthouse Tea Room with the best warm welcome from a family run business in Filey. Number 12 Yorkshire Holiday House is 5 mins walk 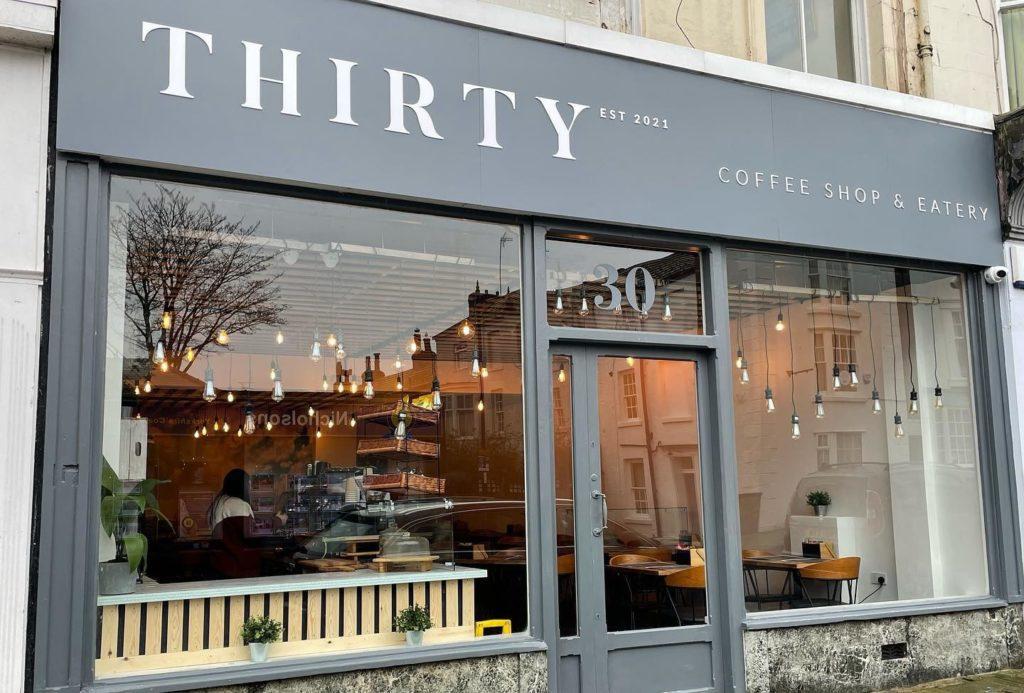 Join Our VIP Email List for Offers, Promotions and Giveaways.

This website uses cookies to improve your experience while you navigate through the website. Out of these cookies, the cookies that are categorized as necessary are stored on your browser as they are essential for the working of basic functionalities of the website. We also use third-party cookies that help us analyze and understand how you use this website. These cookies will be stored in your browser only with your consent. You also have the option to opt-out of these cookies. But opting out of some of these cookies may have an effect on your browsing experience.
Necessary Always Enabled
Necessary cookies are absolutely essential for the website to function properly. This category only includes cookies that ensures basic functionalities and security features of the website. These cookies do not store any personal information.
Non-necessary
Any cookies that may not be particularly necessary for the website to function and is used specifically to collect user personal data via analytics, ads, other embedded contents are termed as non-necessary cookies. It is mandatory to procure user consent prior to running these cookies on your website.
SAVE & ACCEPT